Large winner Valencia (1-4), Sunday in La Liga, FC Barcelona continues its beautiful rise in the standings. Aware of the incredible potential of his team, Xavi was particularly enthusiastic about his youngsters, Pedri, Gavi and Nico. 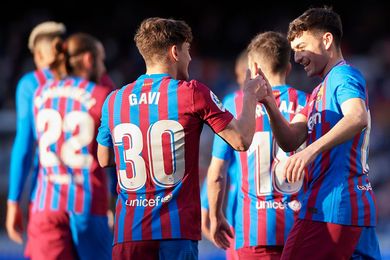 The Xavi effect is felt at FC Barcelona. After a disastrous start to the season under the orders of Ronald Koeman, the Catalan coach manages little by little to straighten out his heart club.

Undefeated in the league since December 4 against Betis (0-1), the blaugrana formation remains on three games with 10 goals scored in February against Atletico Madrid (4-2), Espanyol (2-2) and the FC Valence (1-4), thus moving up to 5th place in La Liga despite one game less. And if Pierre-Emerick Aubameyang distinguished himself with a hat-trick against the Murcilagos, the Barcelona technician preferred to praise other players in his team.

Xavi- there is no talent in the world like Pedri

Returning to a good level after several complicated months due to recurring physical glitches, Pedri made a very good entry between Mestalla, with in particular a heavy winning strike deflected by the back of the Gabonese striker a few moments after his entry into play. Half an hour very solid that prompted Xavi, usually sober, to compliment him in a very pronounced way. There is no talent in the world like Pedri os the 2010 world champion after the meeting.

He is a top player, the timing he has to understand the spaces is incredible. It’s wonderful to have him with us. He has a lot of srnit. When he transcends himself like today, he becomes a major player. He has a good shot, he shoots set pieces well. He still needs to dare more, but he is only 19 years old. I understand that he can be shy at times, but not everyone has his qualities. He’s not a normal player. There are very few like him added Xavi.

In addition to his 19-year-old metronome, the former Al Sadd technician has not forgotten his two other partners, Gavi (17) and Nico (20). A magical trio that Xavi very much hopes to see in the future. I hope Nico, Pedri and Gavi can give us more joy and go beyond what Busquets, Iniesta and I have done , continued the 42-year-old coach. If spared from injuries, these three players, in addition to Frenkie de Jong, could actually do a lot of good for FCB. Is the revival finally underway?

What do you think of Xavi’s release on his young shoots? Do not hesitate to react and discuss in the area add a comment …