FLoC (Federated Learning of Cohorts), Google’s controversial project to replace cookies for interest-based advertising by grouping users into groups of users with comparable interests, is dead. Instead, Google announced a new proposal: Topics. The idea here is that your browser will learn your interests as you move around the web. It will retain data for the last three weeks of your browsing history and from now on Google is limiting the number of topics to 300, with plans to expand this over time. Google notes that these topics won’t include any sensitive categories like gender or race. To determine your interests, Google classifies the sites you visit according to one of these 300 topics. For sites it hasn’t ranked before, a lightweight machine learning algorithm in the browser will take over and provide an estimated topic based on the domain name.

Google has announced to developers that they can now test Topics in the Canary version of Chrome.

Cookies store information about your connections or what you have viewed on a shopping site. Advertisers use this information to better understand your behavior online and even offline, and to provide you with specific and targeted advertisements that follow you around the Internet. Google has said it wants to make Internet browsing less invasive, but the company also wants to continue making money from online advertising. This desire led to the abandonment of cookies in favor of the FloC system.

Whatever goodwill Google might have shown in recent years, such as combating ad abuse and systemic user tracking, its efforts have been challenged with the solution the company has offered. Fdr Cohort Learning or FLoC is touted as a better strategy that protects people’s privacy while giving advertisers something they can take advantage of. Privacy advocates, however, are sounding the alarm over what they see as even worse technology, and Chromium-based browser makers like Brave and Vivaldi are pledging to fight FLoC in all its forms.

In a nutshell, FLoC changes individual user tracking and fingerprinting to group (cohort) identification based on similar browsing histories of members of that group. FLoC essentially places people into groups based on similar browsing behaviors, which means that only cohort IDs and not individual user IDs are used to target them. Web history and inputs for the algorithm are kept on the browser, with the browser exposing only a cohort containing thousands of people.

However, many privacy advocates are unconvinced of this and see FLoC as an even worse solution than the problem it is trying to solve. Besides potentially violating laws like GDPR, critics also point out that FLoC collects more private data in the form of browsing history than even tracking cookies do. Although unique individual identities may be hidden behind cohorts, the data held by browsing history can still be considered something private, especially when it will be easy to develop profiles for members of this group.

Faced with the outcry, Google has made another proposal to track users and allow advertisers to make targeted advertisements: Topics API.

The new system would still eliminate cookies, but it would notify advertisers of a user’s areas of interest based on the last three weeks of the user’s web browsing history. Topics will be retained for three weeks before being deleted.

When you access a Topics API-enabled site for advertising purposes, the browser shares three topics of interest to you (one for each of the past three weeks) randomly selected from your top five topics for each week. The site can then share this with its advertising partners to decide which ads to show you. Ideally, this would provide a more private method of deciding which advertisement to show you and Google notes that it also gives users far greater control and transparency than is currently the norm. Users will be able to view and remove topics from their lists, and also disable the entire Topics API.

In a blog post, Google broke the news to developers:

We recognize that developers will need time to use APIs, validate data flows, and measure performance. We look forward to feedback from companies as they go through the various testing phases, which will allow us to continually improve the APIs. Once we’re confident the APIs work as intended, we’ll make them widely available in Chrome, allowing more developers to integrate, evaluate, and provide feedback as we continue to optimize them for their use cases.

Developers can expect support from Chrome in the form of developer guidance, regular updates, and a range of feedback and engagement channels. We strongly encourage developers to share their feedback publicly and with Chrome, and we’ll closely monitor progress along the way. We also welcome the role that industry associations can play in this process, from facilitating collaborative industry testing to aggregating feedback topics.

Chrome will also begin testing updated Privacy Sandbox settings and controls that allow users to see and manage interests associated with them, or disable testing altogether.

Topics will allow Chrome to locally track your browsing history and build a list of interests, which Chrome will then share with advertisers whenever they request ad targeting. The FLEDGE API is responsible for both running an advertising action directly on your device and selecting an advertiser and then targeting users based on their behavior, such as leaving an item in a shopping cart. The Attribution*Reporting API is responsible for measuring ad clicks, impressions, and tracking purchase conversions.

Besides setting up the first version of the system for advertisers, Google’s post also gives us a glimpse of what the user controls will look like. There is now a chrome://settings/privacySandbox page, where you can enable or disable the trial. The browser-based ads customization page lets you see the Topics Chrome thinks you’re interested in, and you can remove the ones you don’t. 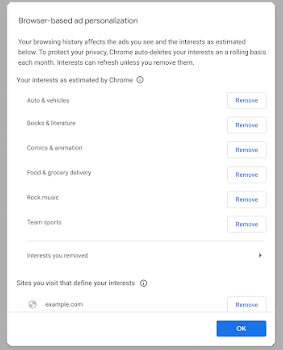 Again, this is only for the experimental Chrome Canary browser, which no one uses as a daily browser, so it will be a while before most people see these commands.

The Privacy Sandbox proposals have already benefited greatly from thoughtful feedback from early testers, and we look forward to opening testing for more of our proposals. We will continue to gather feedback from the ecosystem and engage with regulators around the world, including through our work with the UK Competition and Markets Authority, in line with our Web Privacy Sandbox commitments.

About Topics, he said that:

With Topics, your browser determines a handful of topics, like “Fitness” or “Travel and Transportation,” that represent your top interests for a given week based on your browsing history. Topics are only kept for three weeks and old Topics are deleted. Topics are curated entirely on your device without involving any external servers, including Google servers. When you visit a participating site, Topics selects only three topics, one topic from each of the past three weeks, to share with the site and its advertising partners. Topics allow browsers to give you meaningful transparency and control over this data, and in Chrome we’re building user controls that allow you to view Topics, delete the ones you don’t like, or turn off the feature altogether. .

More importantly, subjects are carefully screened to exclude sensitive categories, such as gender or race. Because Topics is powered by the browser, it gives you a more recognizable way to see and control how your data is shared, compared to tracking mechanisms such as third-party cookies. And, by providing websites with your topics of interest, online businesses have an option that doesn’t involve secret tracking techniques, like browser fingerprinting, in order to continue delivering relevant ads.

With 82*% of its revenue being based on ad revenue, this latest Chrome development shows that Google doesn’t want to threaten its biggest moneymaker. Google continues to assert that it is mandatory to create an alternative user tracking system for advertising purposes and the company asserts that it will not block third-party cookies until it has accomplished this, regardless of the final solution.

What do you think of the Topics API in its design? Does it respond effectively, in your opinion, to the concerns raised by FloC?