In April 2015, Laurent Charles, who takes care of molluscs at the Museum of Bordeaux, set off to explore the biodiversity of the island of Mayotte, in the Indian Ocean. Islands are often hotspots for the biodiversity of terrestrial molluscs, and an experienced researcher never comes home empty-handed in terms of new species, often tiny snails. During his research, Laurent found a strange little worm of an extraordinary color, golden blue-green. He immediately had the good idea to take pictures on the spot, and of course, to collect some specimens. The forest around Mamoudzou, Mayotte © Laurent Charles / Muséum de Bordeaux (via The Conversation)

In 2018, we did a large survey of hammer-headed flatworms (or flatworms), based on citizen science research, i.e. individuals sent us pictures of worms found in their gardens, in metropolitan France, but also in the overseas departments.

In this 2018 work, we also reported the existence of this worm and its presence in Mayotte. No species in the world having this extraordinary color, we had the premonition that it was a species unknown to science. We also did a molecular analysis of the gene encoding the first subunit of cytochrome c oxidase, or cox1a mitochondrial gene widely used for barcoding animal DNA.

Indeed, each animal species corresponds to a sequence of cox1, which is characteristic of it. For this species, the barcode was quite different from any known in this group of Bipaliinae, or “hammerhead-headed flatworms.” 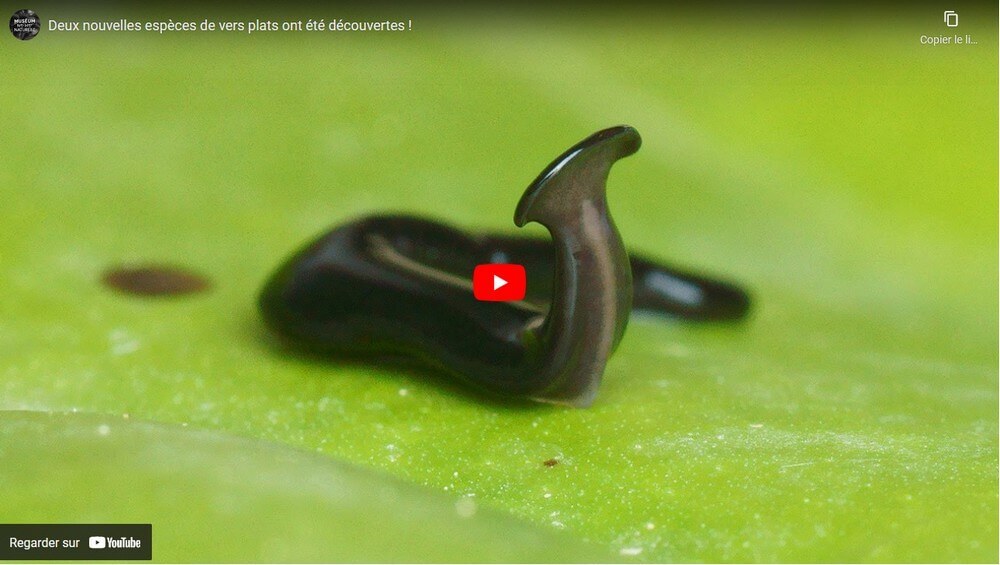 But the formal description of a species requires much more detail, otherwise it will not be recognized by the scientific community. We therefore called this species of Mayotte: Diversibipalium ” blue “. For a specialist, this name, despite its seven syllables and its appearance of seriousness, clearly showed the extent of our ignorance. Indeed, the genus Diversibipalium was created to classify species that resemble Bipalium (a well-known genus of hammer-headed flatworms), but for which the anatomy of the sexual organs is unknown. A kind of catch-all, justified by the fact that these species often abandon sexual reproduction – which embarrasses researchers. And ‘blue’, which is not a Latin word, meant that we couldn’t give a Latin name, so we couldn’t really name the new species. The mitochondrial genome of Diversibipalium mayottensis © Justine et al., 2022 (via The Conversation)

​The sister group to the other hammer-headed flatworms

We had only a few specimens of our Diversibipalium “blue”, but we still decided to destroy one to extract its DNA and characterize its mitochondrial genome. And there, surprise, this mitogenome was very different from those of all the other Bipaliinae, or “hammer-headed flatworms” for which we had information.

In fact, in our analyses, Diversibipalium “blue” was the sister group to all other Bipaliinae. What is a sister group? It is a species that has a common origin with a whole group of other species. Before the use of cladistics spread in the 1980s, a science that allows species to be classified according to a rigorous method, some might have called this species “the ancestor of the Bipaliinae”, which it does not is definitely not. 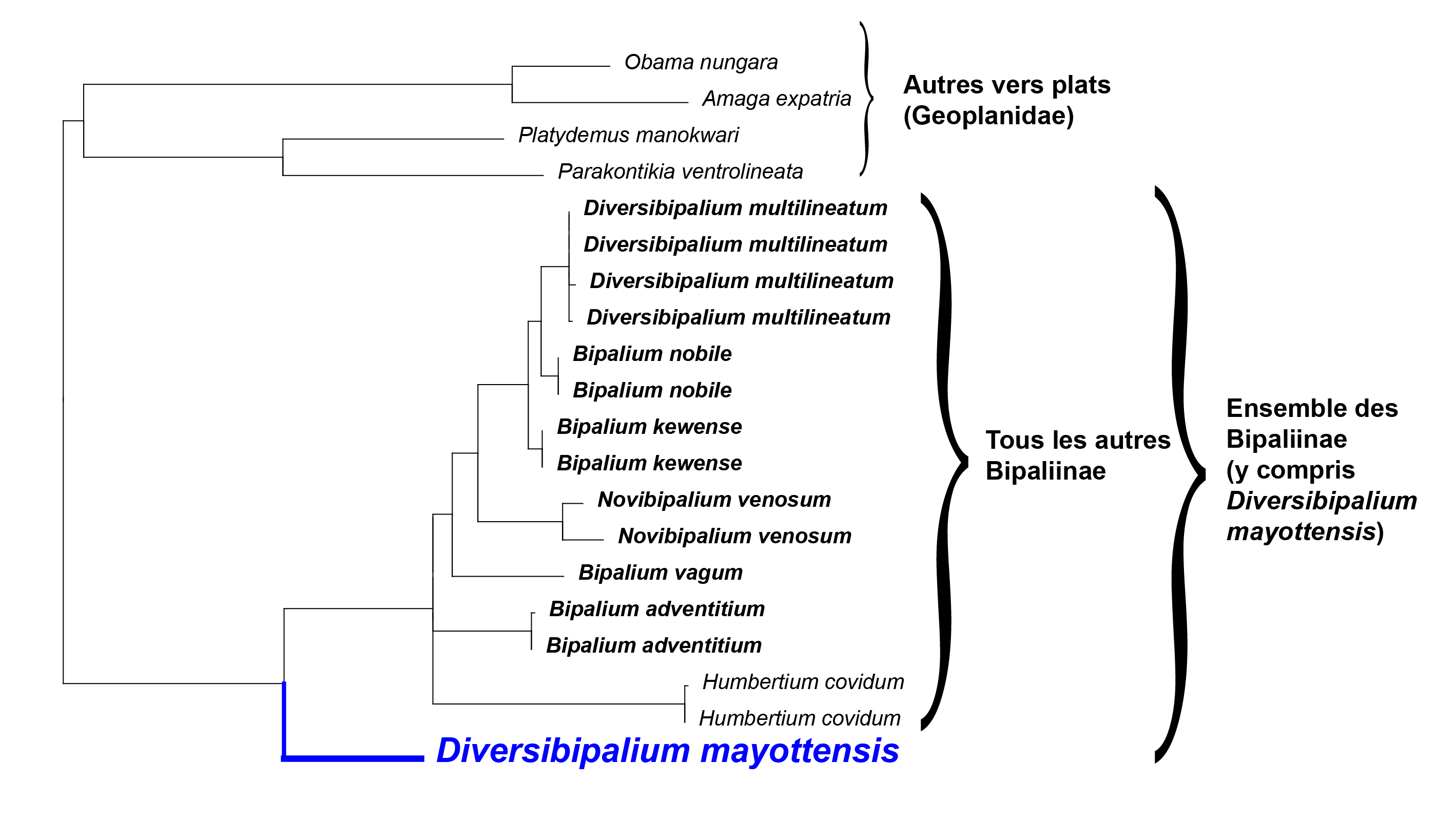 A phylogenetic tree of terrestrial flatworms (Geoplanidae) based on molecular analysis. Diversibipalium mayottensis is the sister group to all other hammerhead flatworms (Bipaliinae) © Justine et al., 2022 (via The Conversation)

The name mayottensis : is it well chosen?

In an article published in early 2022, we therefore decided to give this species a name, and we simply chose mayottensis, which means in the Latin cuisine of scientists “which comes from Mayotte”. We kept it like Diversibipaliumsince we have not been able to describe its sexual organs, but we have noticed that it may well be necessary one day to give it a new gender name.

So now we have a species Diversibipalium mayottensiswith its entirely official Latin name, and its very interesting position in a flatworm tree, as a sister group to the other Bipaliinae.

Despite this name, Diversibipalium mayottensis does she really come from Mayotte? Probably not ! Mayotte is a relatively young volcanic island, only a few million years old, and so there is no question that this small island has hosted the sister group of all the Bipaliinae for very long. The species therefore comes from elsewhere. There are no hammerhead flatworms in mainland Africa, but they are common in Asia and Madagascar.

For another species, Humbertium covidum, which we also described in 2022 and which was found in France and Italy in gardens, the situation was simpler: it seemed obvious to us that it had recently been imported into Europe from Asia, probably in potted plants, in relation to globalization. It is clearly an introduced species. 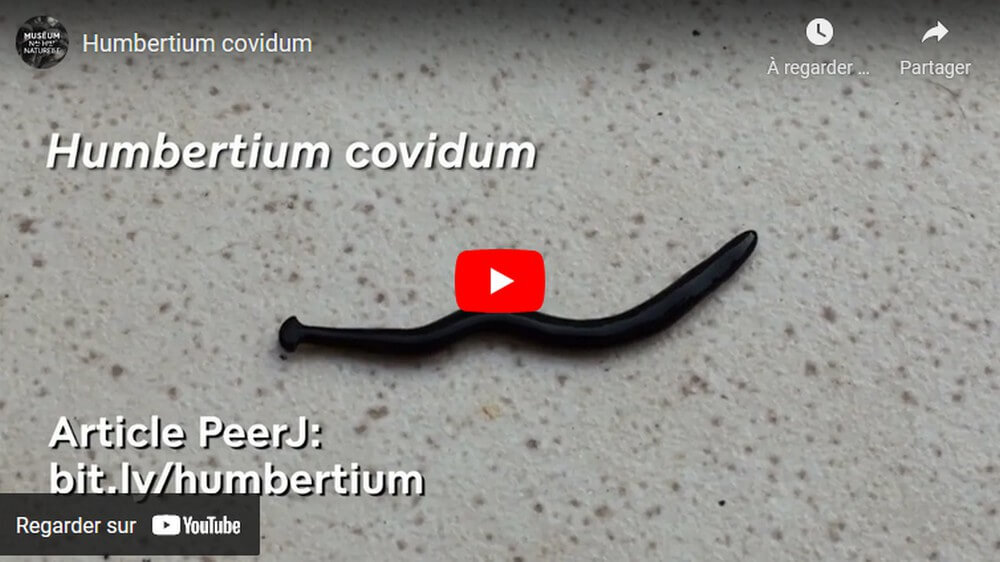 For Diversibipalium mayottensis in Mayotte, the Malagasy origin seems much more likely to us. Indeed, Mayotte and Madagascar have been in historical contact for centuries, and it is enough for a few travelers to have brought living plants in their traditional boats to have also imported the species.

We therefore assume that Diversibipalium mayottensis is in fact a species from Madagascar, which was brought to Mayotte a few centuries ago, where it is well established. This would correspond well with this hypothesis of a group of species from Madagascar, which would be the sister group of the Bipaliinae of Asia, and which would have evolved separately on the Big Island.

Invasive or endemic species of Mayotte?

If our assumption is correct, Diversibipalium mayottensis is therefore an introduced species in Mayotte, and if it is confirmed that it is widespread, it could be placed in the category of IAS, “invasive alien species”. But then, is it really? It is here that the hypothesis of a few centuries of introduction to Mayotte takes on its full importance.

Indeed, it is not easy to classify the species introduced for several centuries in a territory and well established. For Diversibipalium mayottensis, what should we conclude? Introduced species, therefore to be fought to prevent it from disturbing the ecological balance of the island, or on the contrary species known nowhere else, interesting by its phylogenetic position, and therefore to be protected? We lean more towards protection.

What can be done to better interpret this presence of Diversibipalium mayottensis in Mayotte? Collect flatworms in Madagascar, and find its place of origin, or neighboring species. But all this is perhaps even more complicated: Madagascar was populated by Austronesian peoples, and the Madagascar flatworm fauna may have been brought partly from Asia, by these peoples, a couple of years ago. millennia. The past of Diversibipalium mayottensis is probably complex, and inextricably linked to human migrations.

This analysis was written by Jean-Lou Justine, professor at the Institute of Systematics, Evolution, Biodiversity of the National Museum of Natural History (MNHN) and Leigh Winsor, researcher at James Cook University (Australia).
The original article was published on the site of The Conversation.

You can also modify your choices at any time via “choice of consent”.