Algeria – The Algerian oil company, Naftal, launches its first mobile application, Naftal Khadamat available via Google Play. We will inform you more on the subject in the following article of February 24, 2022.

Indeed, the national company for the marketing and distribution of petroleum products in Algeria, Naftal, now has a mobile application called “Naftal Khadamat”. It will therefore now be operational from February 24, 2022. This is at least according to the information provided by the media 24 Algeria.

To this end, Naftal Khadamat a mobile application was officially launched this Thursday by the Algerian company; specialized in the oil field, Naftal. Its launch is part of the continued digitization of the company’s activities. It is now available for free download from the Google Play store.

The application would then provide access to a wide range of various products available. But also to locate service stations and their service schedules. Customers will also be able, through this application, to rate their services and report malfunctions.

The mobile application will also allow users to be better informed about the launch of new products. Since, Naftal Khadamat will take care of sending notifications to its various users in order to keep them informed about important information, road warnings and news. This, in addition to having the possibility of consulting and obtaining the addresses of after-sales services.

To better understand the approach and the impact that this project can have; in particular, it will be a big step towards the digitalization and modernization of the company’s customer services. Naftal also recalled that its launch coincides with the celebration of the double anniversary of the creation of the General Union of Algerian Workers (UGTA) and the nationalization of hydrocarbons. This is again what the aforementioned source informs us according to the press release issued by Naftal. 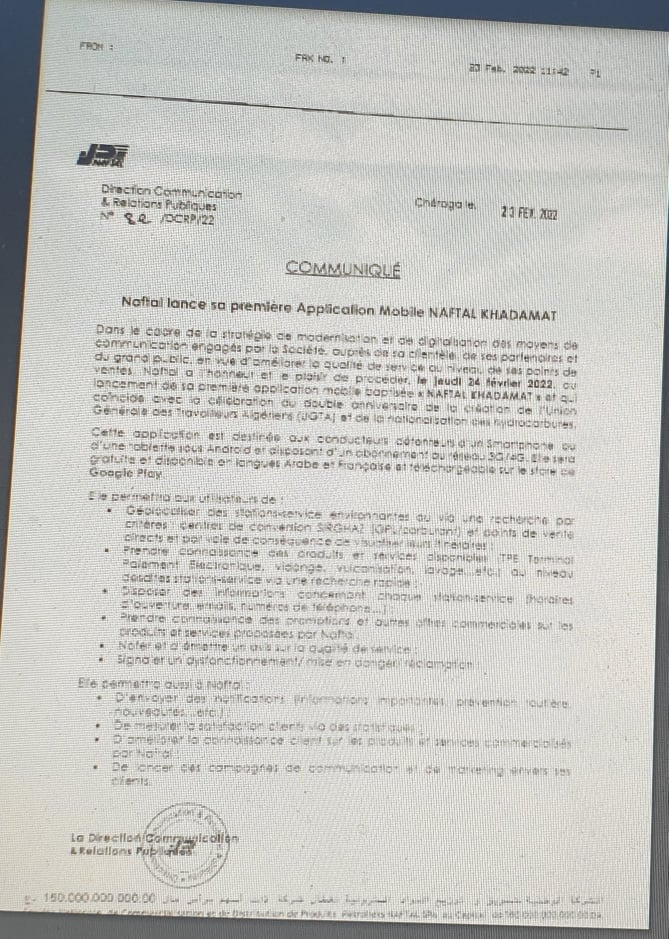